Have a look at our portrait gallery of Henry VIII and his six wives.

The challenge this week was to find out ways to separate mixtures. Pupils were given different mixtures including salt and water, sand and rice, sand, rice and drawing pins, flour and rice as well as sand and water and polystyrene balls. They had to come up with a way to separate each ingredient.

Using sieves, filter paper and magnets they got to work.

Mrs Jones demonstrated how to use evaporation to separate a salt solution.

We gathered together in front of our new altar for October, the month of the Rosary, for a collective worship written and led by Olivia, Elliot and Teresa. 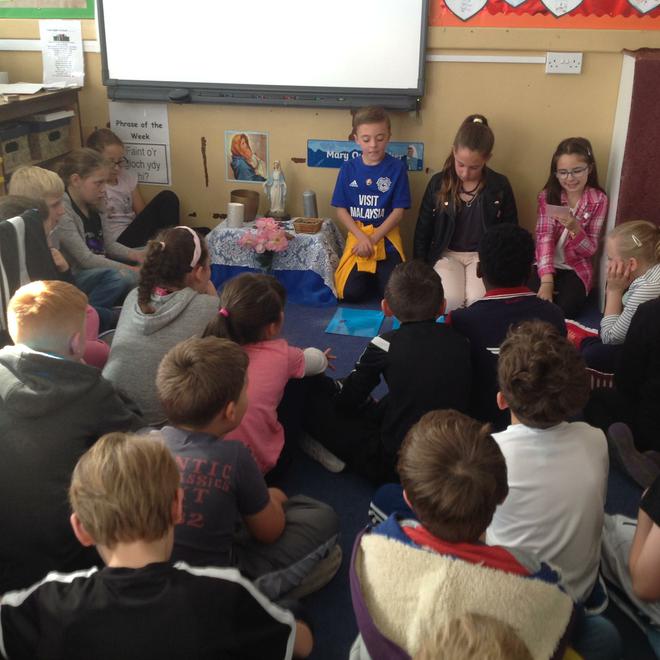 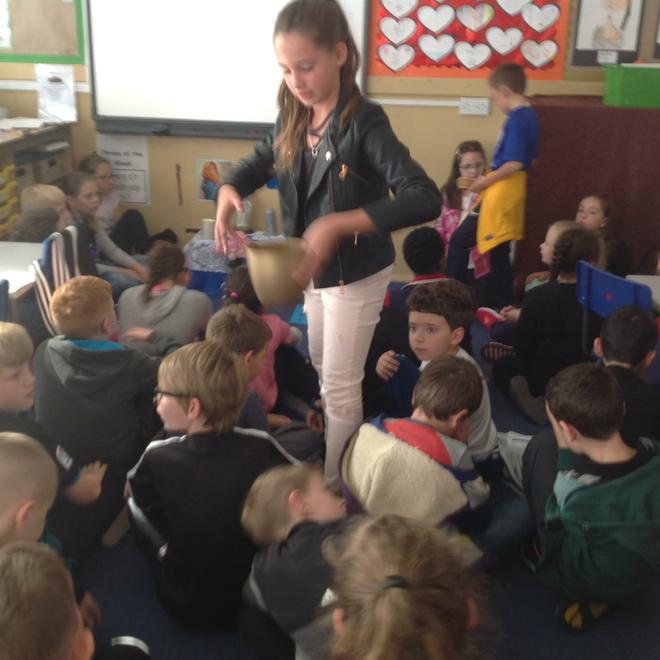 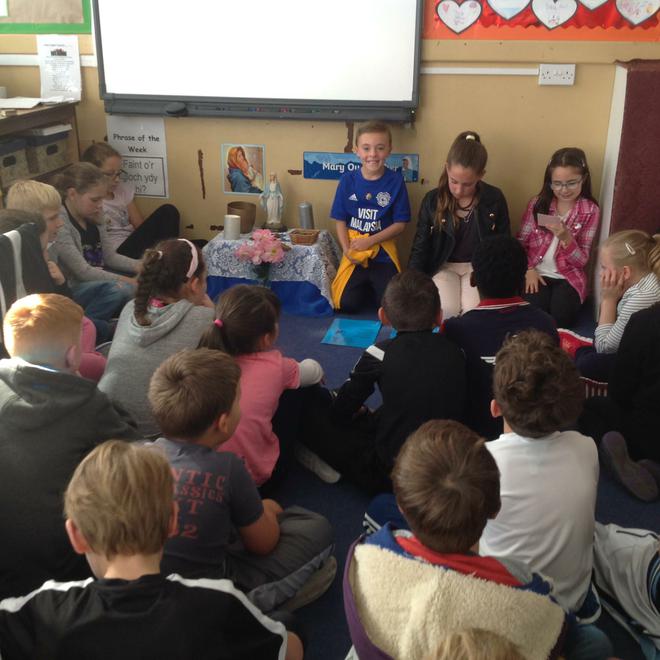 "We hold many talents."

Our RE display celebrates our talents. Every child had to design a star which described their talents or in some cases they were asked to write about the qualities they saw in a friend.

This week in science we had to test out how temperature and stirring affect dissolving. We mixed sugar with cold, tepid and then hot water and timed how long it took to dissolve in each. We then re-tested, but this time we introduced stirring and compared the difference in our results.

We found out that temperature and stirring speeds us dissolving.

Our Class Trip to Llancaiach Fawr.

The Manor House near Nelson, was built around 1550 for Dafydd ap Richard.

The Manor was designed to be easily defended during the turbulent reigns of Tudor kings and queens and is considered to be one of the best examples of a semi-fortified manor in Wales today.

As well as touring the house, pupils took part in three workshops. They learned about how the rich and poor lived, what they ate, the differences between boys and girls.

They sat in on a Petty Sessions hearing of Court before learning about the medicine of the day, made their own "Plague Bag" which was the only defence the poor would have against the deadly plague, crafted their own soap ball like the rich ladies of the time and then found out what life was like for Tudor children by playing games such as drop the handkerchief and "Goose and Frog" in the courtyard of the Manor House.

Our Welsh wall is chockablock with words. Tests your Welsh  and see if you can translate the graffiti.

Our new display board is celebrating our best work. Every pupil has a their own Hollywood star from the Walk of Fame and Mrs Jones will choose the best pieces of work to feature on the display, as well as highlighting pupils' achievements and success stories.

At this harvest time of year we have been thinking about all we have and what we should be thankful for in our lives. We have a Cafod box on our harvest prayer corner. Any donations of loose change would be gratefully received.

A collective worship led by Breanna, Olivia and Isabella.

We shared our knowledge to create bubble maps detailing what we had learned from our trip to Llancaiach Fawr.

We had to find out how best to dissolve jelly. We made predictions and tested out our theories by trying to dissolve jelly in cold, then tepid and finally hot water. The first time we stirred, then we retested by not stirring. We used a timer to work out which method was fastest. Finally we repeated our experiment by using smaller pieces of jelly.

We had a lesson with a difference when we stepped back in time with the History Chefs to discover the food, good and bad enjoyed by the rich and poor in Tudor times. After much lively discussion about the dishes of the day we got to make our own Tudor bread.

Pupils in Class 6 have written thank you letters to the History Chefs to let them know they really enjoyed the workshop. Carys and Ceri were so impressed by the enthusiasm and knowledge of pupils in St Mary's they told staff they would love to return. In a note to Mrs Jones, Carys said: "You have a lovely school and all the students were so polite and enthusiastic."

Here are some of our thank you letter to the History Chefs.

Have a look at some of our best homework which has made it onto our interactive Tudor Display table.

To prepare for our Tudor banquet we made some Tudor treats including Marzipan-fruits out of playdough. The results were worthy of Masterchef!

To celebrate the end of our topic, Class 6 and Class 7 came together in Tudor dress to sample some tasty fayre, play chocolate chess and dance a traditional Tudor dance.

Thank you to Fr Bord who celebrated today's mass and thank you to all the members of our school community and parish who were able attend. Here are some pictures of the mass taken by Lili.

The entire class shared the Pupil of the Week award this week for helping ensure it was a beautiful class mass.

As part of Anti-bullying Week we have been working out the definition of a bully and thinking of good ways to help the victims of bullying. To raise awareness we have designed and created posters, made badges, and even created our own informational songs, raps and documentaries to help everyone in our school be even better friends. Here are some of our short films and songs.

Blow up Bullying: Build up Friendship 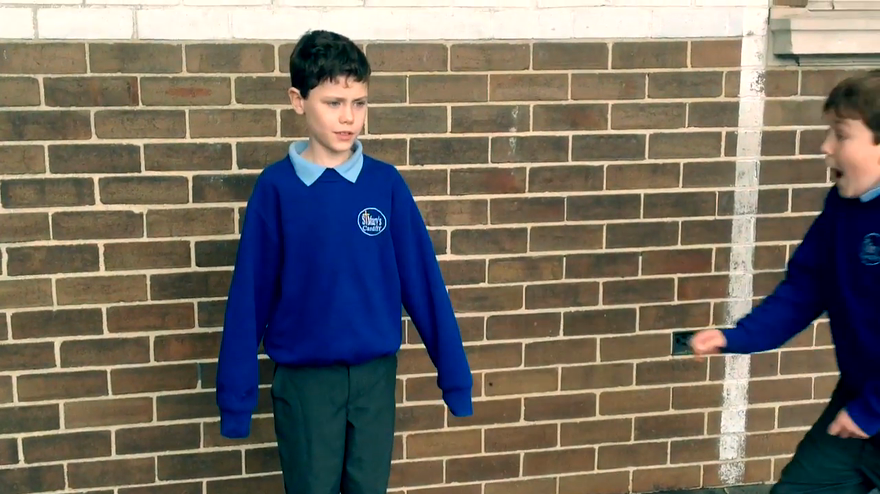 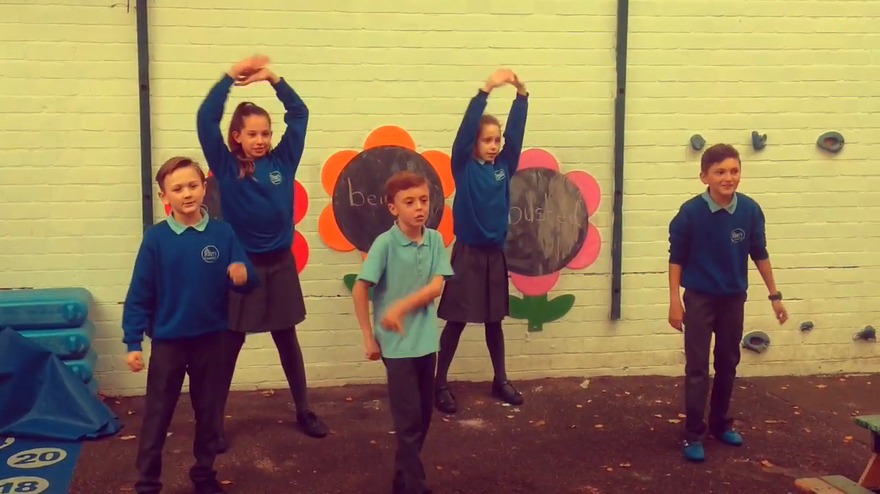 From Bullies to Friends 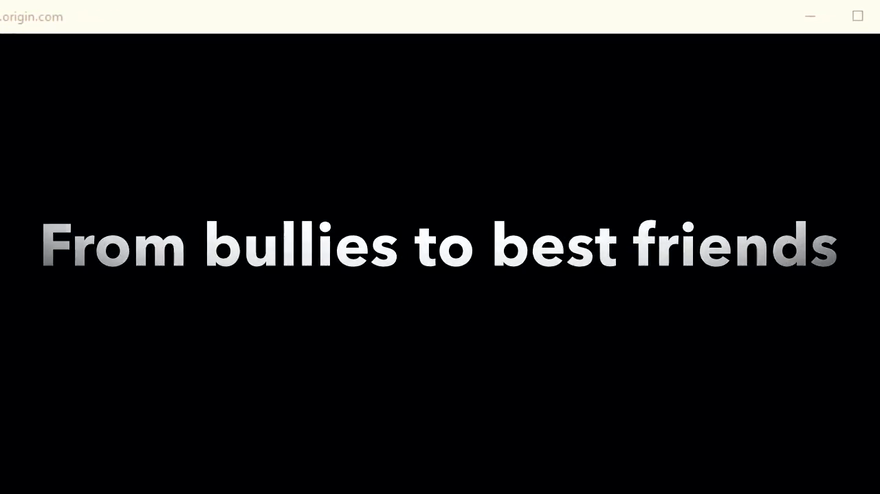 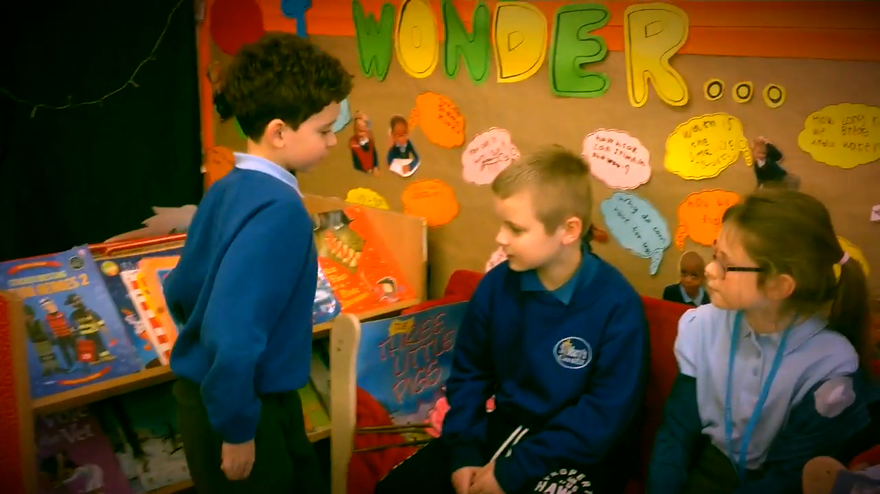 Trouble on the playground 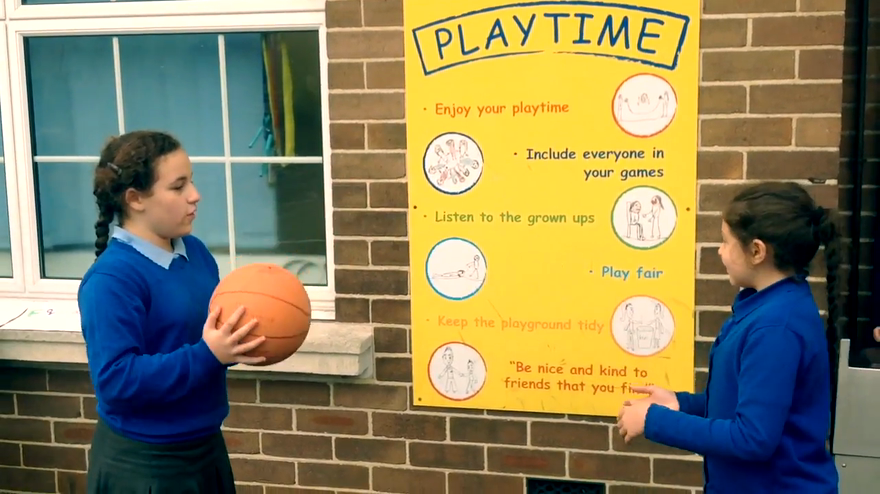 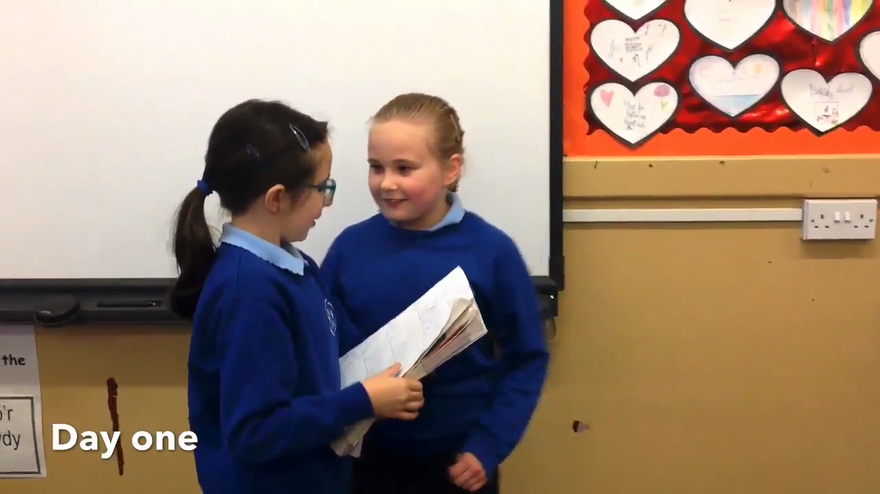 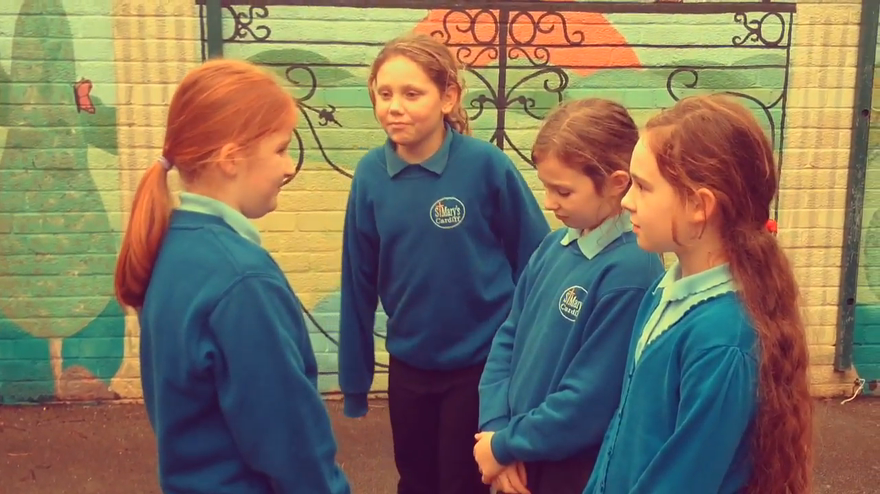 As part of our Christmas theatre trip to see Wind in the Willows pupils were challenged to create a gallery of portraits of Toad's 21st Century famous relatives. Our artwork will be on display in the foyer of the Sherman Theatre during the festive season.

In Science we have been learning how to make an electrical circuit using a light bulb, buzzer and switch as well as accurately drawing these circuits in our books.

We celebrated the New Year by making New Year's Resolutions on the first day back of the Spring Term. Lot of us are hoping to be happier and healthier, to look after our younger siblings and to be kinder to our parents!

This term our Context topic will be Champions and we will focussing on The Winter Olympics, which will be held in South Korea, in February.

Our next RE topic is Mission and includes a learning focus on: Local Church and community, The Eucharist and Lent and Easter.

We will explore how the experience of community is an essential and enjoyable part of life for people of every age and faith.

We will recall the Last Supper and learn more about the liturgy of the Eucharist in Mass. Children will learn about this special part of the mass as an act of thanksgiving to God as well as being a memorial as it allows us to remember Christ's sacrifice on the Cross and gives hope for the future. We will consider how we keep memories alive.

As part of our work on Lent and Easter we will focus on giving. Lent is a time of giving in preparation for the celebration of the sacrifice of Jesus.

Our first pupil-led Collective Worship of 2018 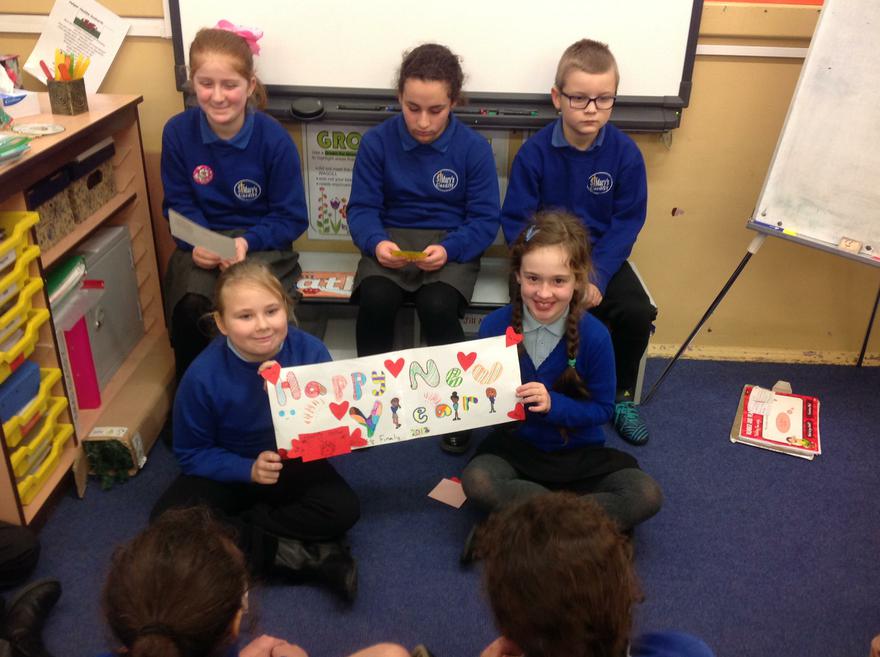 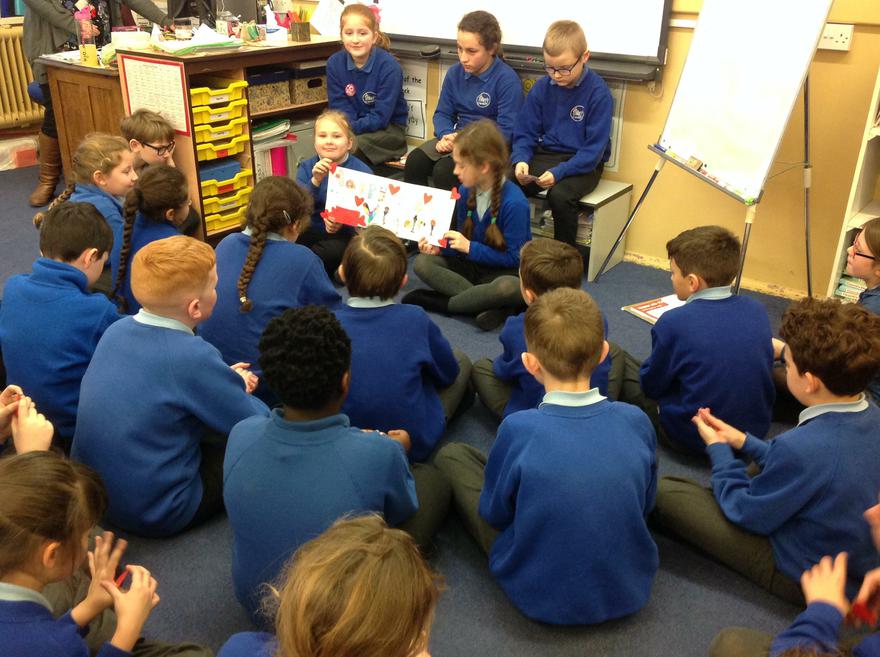 As part of our topic on healthy eating we have created recipes for fruit smoothies, made the drinks and put them to the taste test.

We have promised to give up our treats, give money to charity, be good friends, help our parents and not fight with our brothers and sisters as well as watch less TV.  Let's hope we can all keep our Lenten promises this year.

Champions: As part of our Context topic on Champions we had a real treat when Olivia brought in a baton used by world famous sprinter Usain Bolt in his last ever professional relay race. The baton is fitted with very expensive sensors which are used to time each stage of the race and can prove who crossed the finish line first.

The quality of work by pupils from Class 6 on their Winter Olympic projects has been so inspiring we thought we would share with you some of their facts, their designs and their artwork. Well done to everyone for producing such informative and imaginative work.

We have been busy creating portraits of some of the famous characters from the Welsh legends the Mabinogion, designing posters the Wales Tourist Board would be proud of and showing off our best handwriting for the Eisteddfod Competition. The winners will be announced on March 8.

We have a new Book Corner with a Poet Tree.

As part of our new topic Wonderful World pupils from Class 6 travelled to the Brecon Beacons National Park to enjoy the beautiful scenery, study wildlife including Red Kites in their natural habitat, as well as learn survival skills. It was a fantastic.

Inspired by Eco artist Andy Goldsworthy pupils created their own masterpieces using materials they had collected from their gardens, on a weekend walk or the beach.

Andy Goldsworthy is a British artist who’s best known for the fleeting outdoor sculptures he creates from natural materials, including petals, leaves, snow, ice, rocks and twigs. His work is often fleeting and ephemeral, lasting only as long as it takes for it to melt, erode or decompose, but he photographs each piece right after he makes it.

Pupils were given a homework challenge to get creative and to make something from rubbish.

From mini gardens to toy rockets, dinosaur skulls to dolls' houses and pinball games there was no end to the creativity. Here are just some of the inventions our budding eco entrepreneurs came up with.

Our Trip to the Hay Literary Festival

Pupils from Year 5 and Year 6 were lucky enough to travel to the Hay Festival and get front row seats to see children's author Cressida Cowell give an inspirational talk about achieving her childhood dream of becoming a writer.

Unfortunately not the ones with chocolate chips.

Some cookies are necessary in order to make this website function correctly. These are set by default and whilst you can block or delete them by changing your browser settings, some functionality such as being able to log in to the website will not work if you do this. The necessary cookies set on this website are as follows:

Cookies that are not necessary to make the website work, but which enable additional functionality, can also be set. By default these cookies are disabled, but you can choose to enable them below: